Table Top Addicts and Lonely Havocs will be combining to form Voltron! 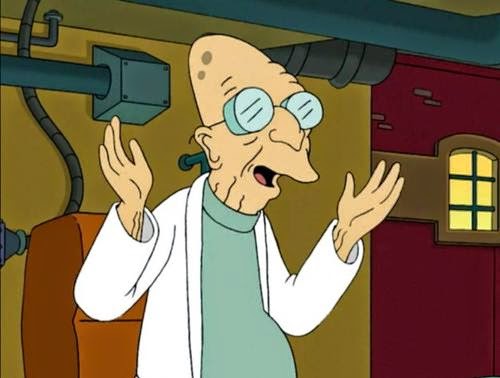 
Makers and I will be joining our friends from our FLGS over at The Lonely Havocs!.

We figure why have two blogs running from the same store when we could combined to form one super awesome Voltron Force. 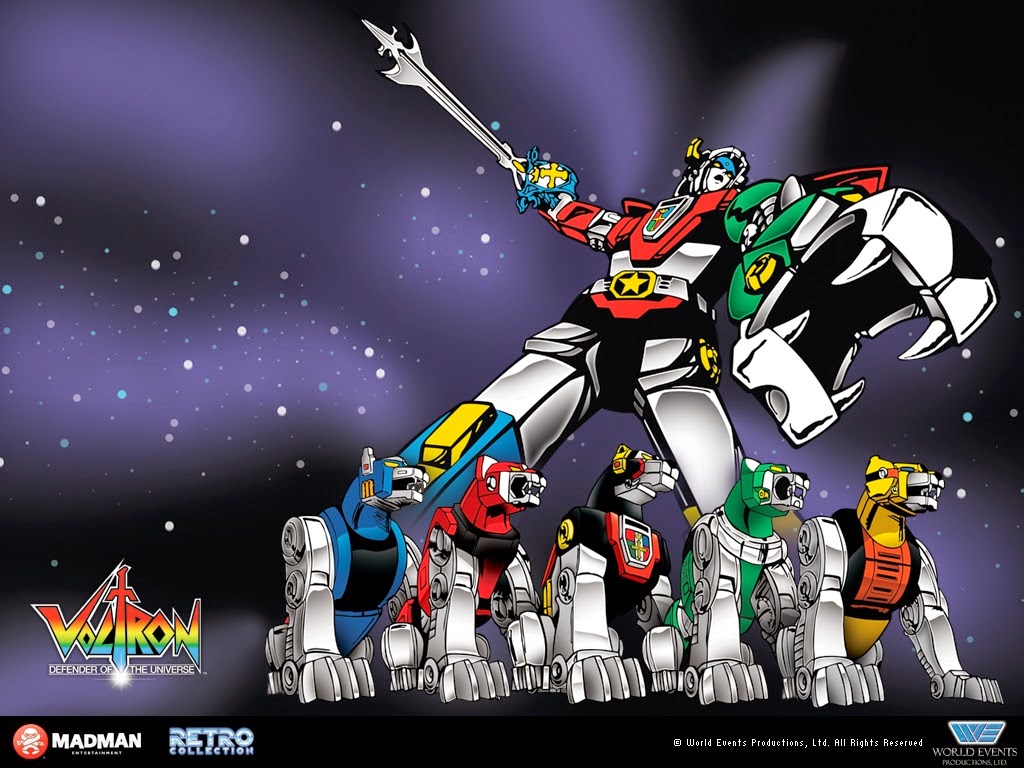 It has been a pleasure talking and sharing with everyone over the past few years and we look forward to many more! Onwards and Upwards!

Please subscribe to Lonely Havocs to continue your adventures in gaming with us.
Posted by Capnmoe 1 comment: 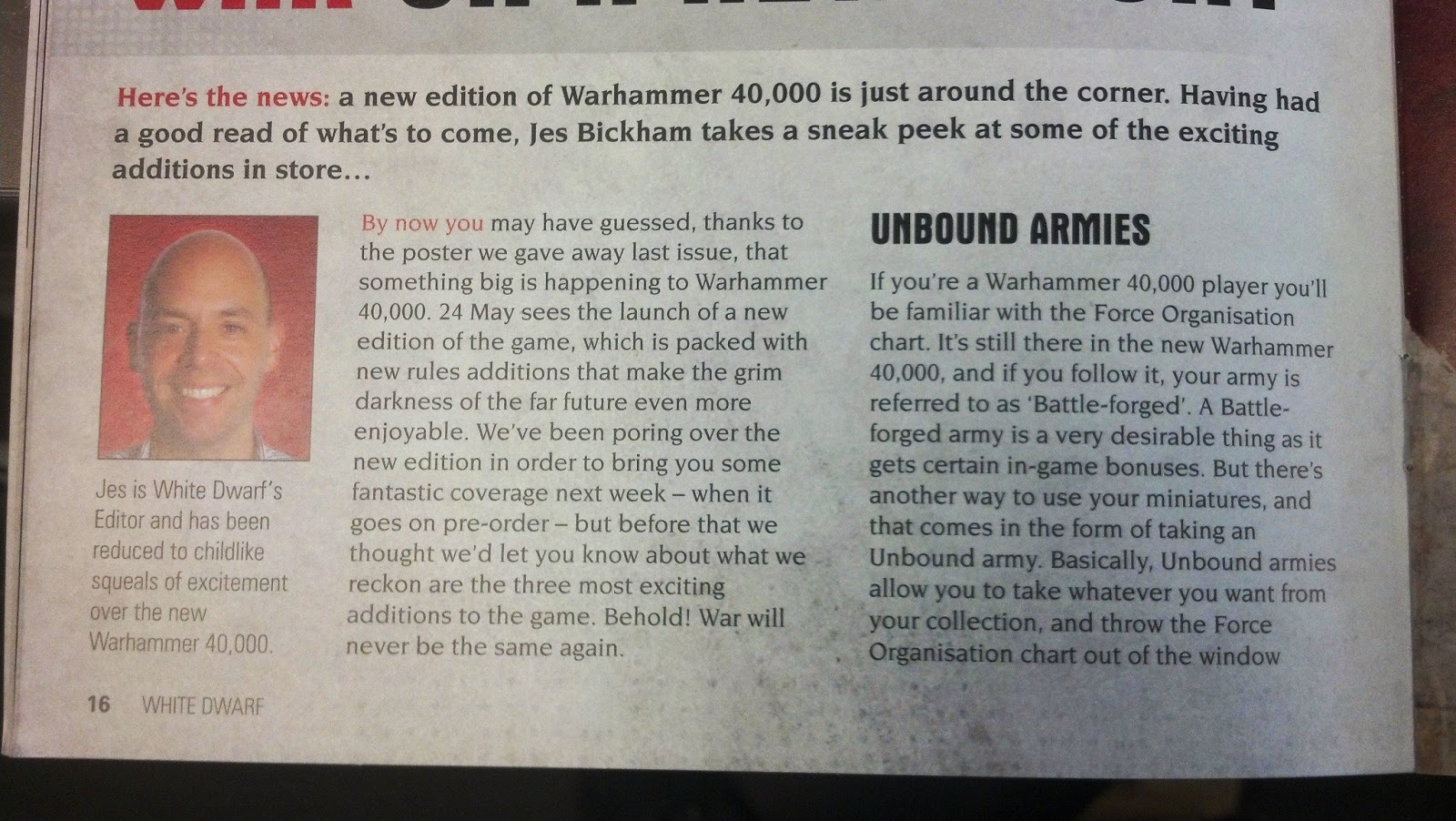 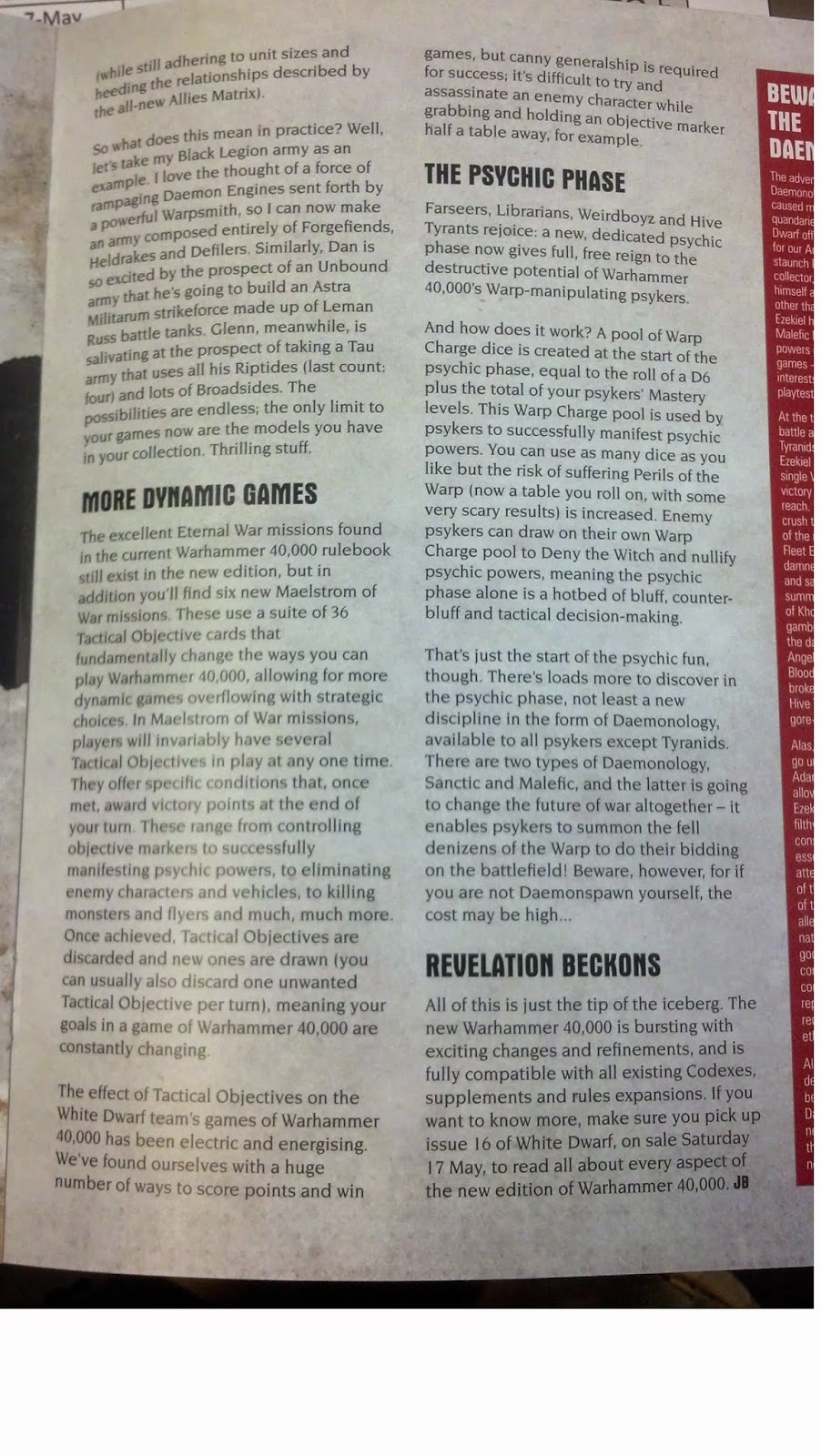 I'm not really sure how I feel about these yet. At the moment I'm more shocked than anything.

Last week I came back from vacation and was finally able to make it to league night.
The League is currently 2 Headed Giant. (2 Man teams, of 1000 points a piece)

Capnmoe and I got to team up with two of our friends over at Lonely Havocs, Slender and Jon.

I brought my Iron Hands and Capnmoe felt like getting the new Aquila Strongpoint that he won from the Titan Tournament on the table... 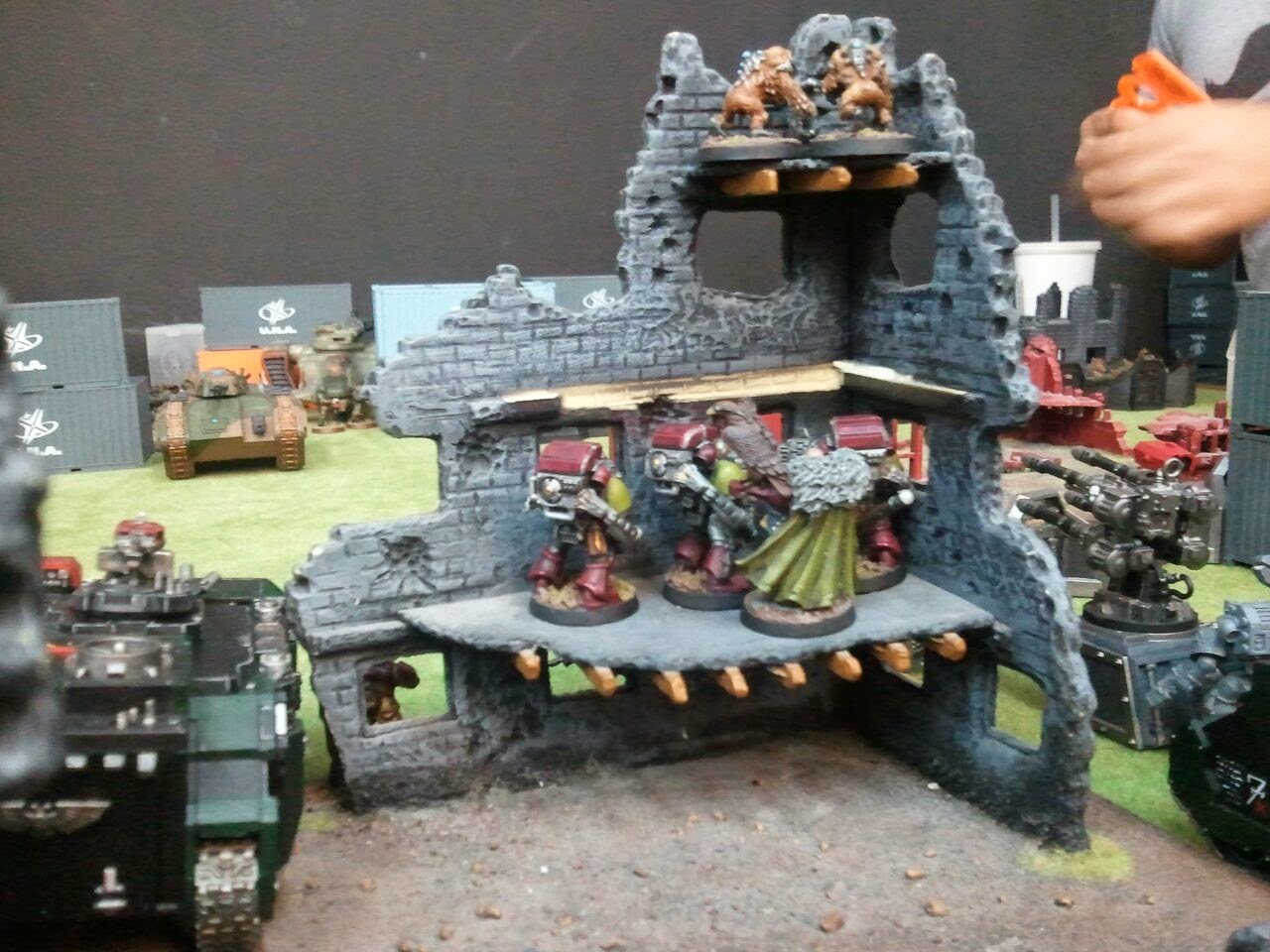 Game was Scouring
Deployment was Hammer and Anvil

No Nightfighting
3 Objectives on each persons side, but we had the larger point objectives.
They won the roll and chose to deploy first. 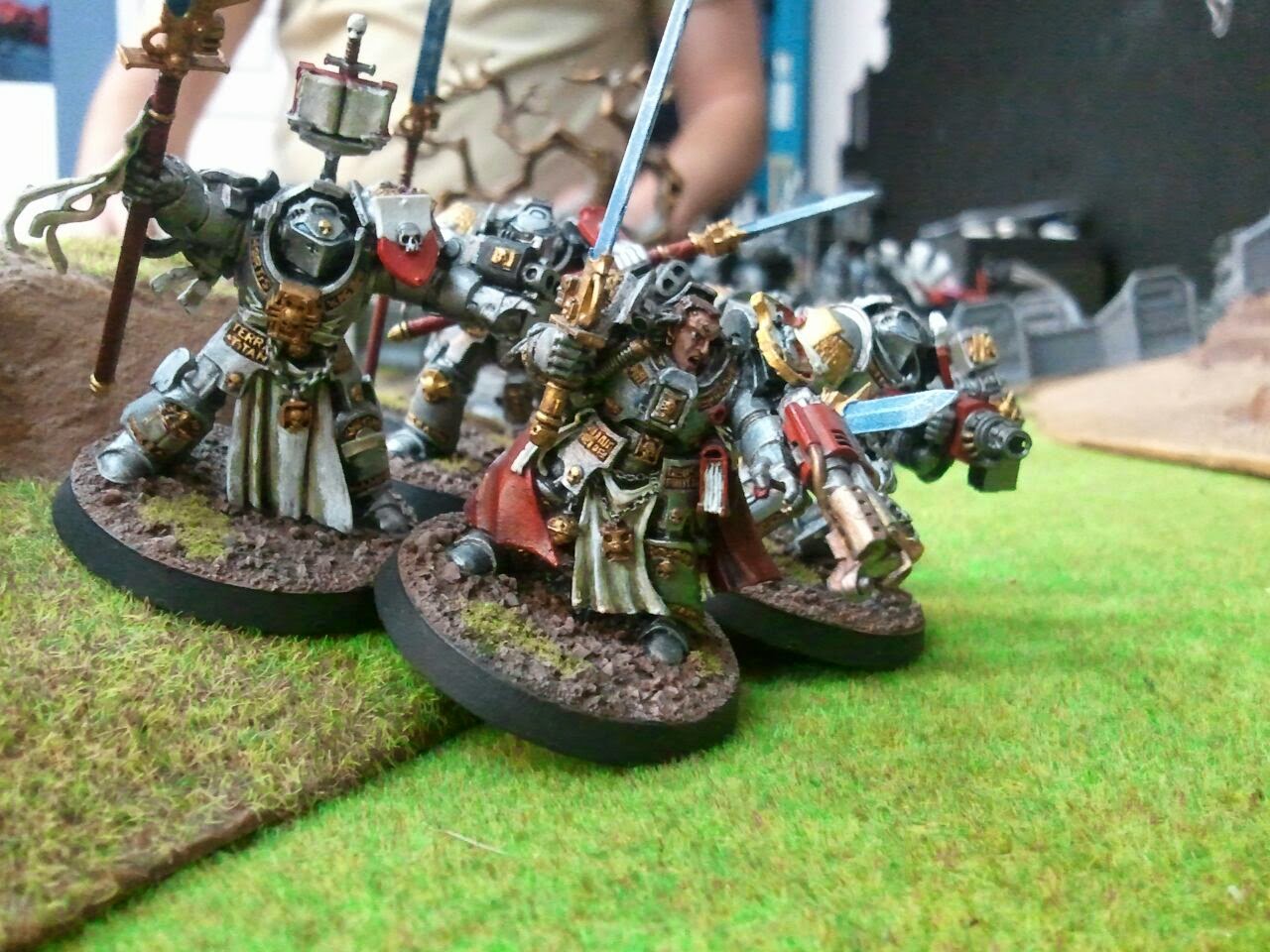 The new Warhammer 40k league began at Fantasy Books and Games. It had been awhile since I played 40k because of our raging Warmachine obsession, and was really nice to get back into it. It's a 2 headed giant league where each team brings two 1000k lists. Makers is on vacation this week so I had to go at it alone. I brought Grey Knights to the fray and was paired against a fantastic Nids player. 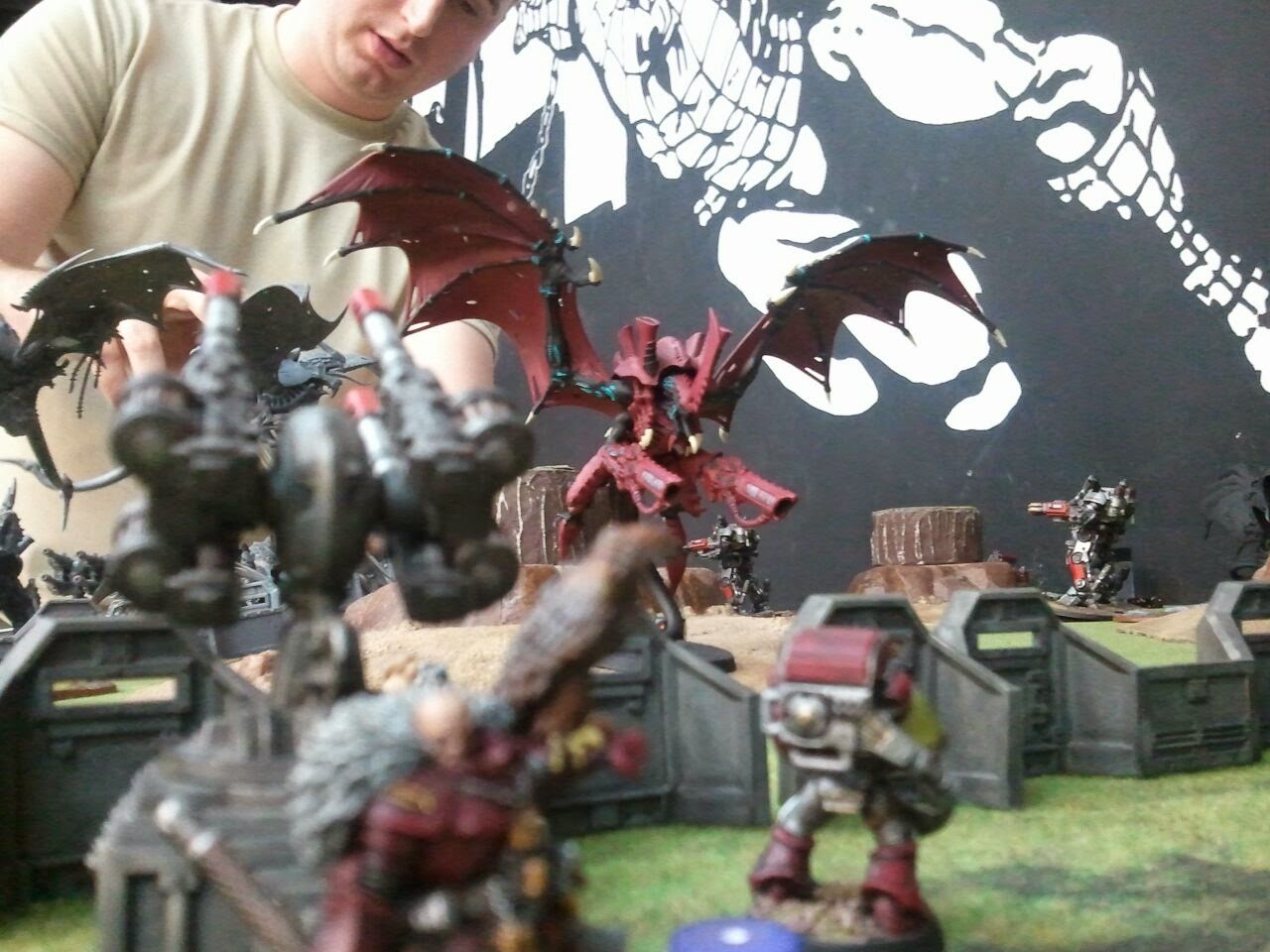 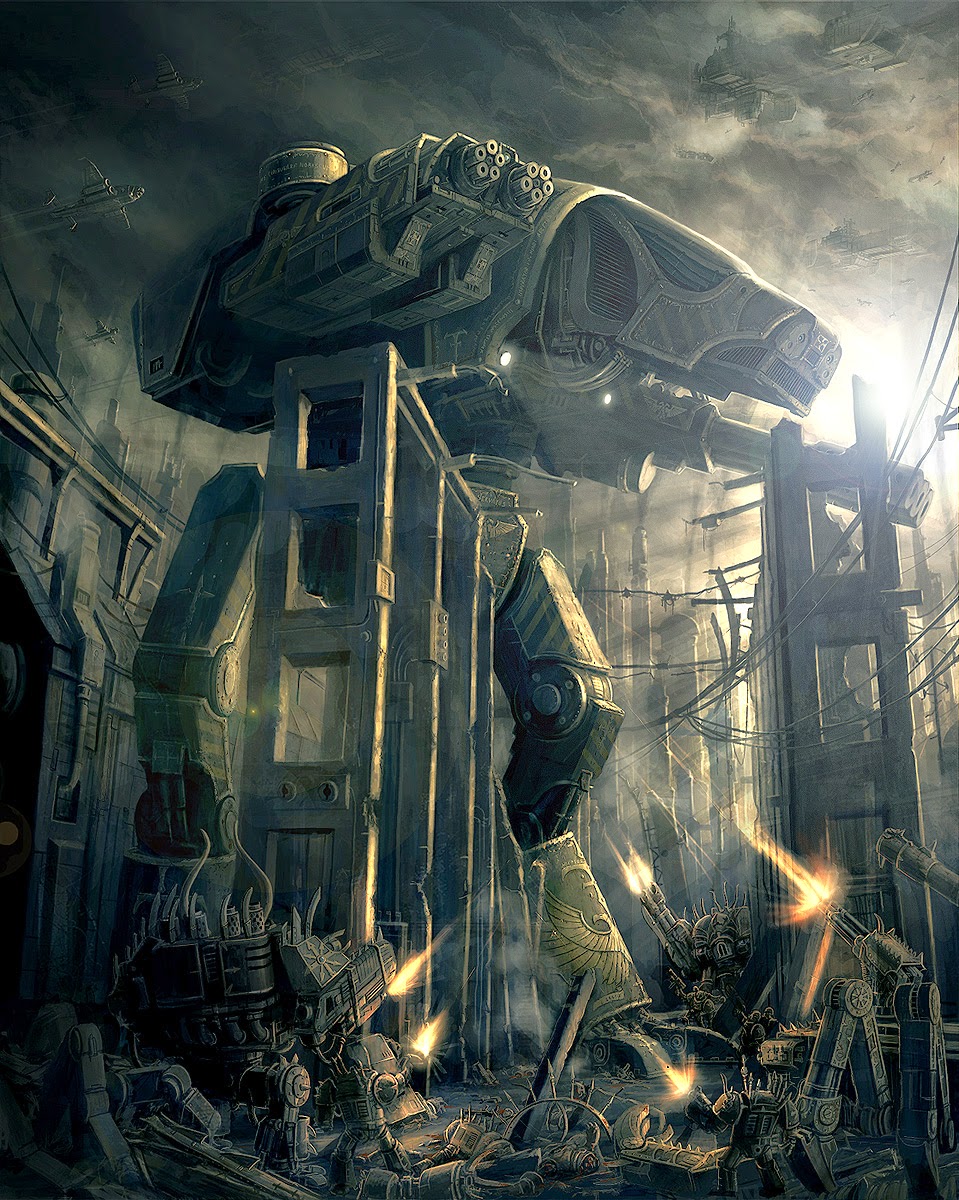 I played in the final round of the Titan Tournament at Ogres this weekend along with 11 of the best players from the area. I played in 3 out of the 4 qualifier events and placed top 3 in 2. That meant I had my choice of bringing Necrons with or without an ally, or Tau/Eldar because those were the armies I placed with previously. Since I had placed 1st when I used my Taudar I decided they were probably the best bet for the final round. The games were 1850 and here's what I was running: 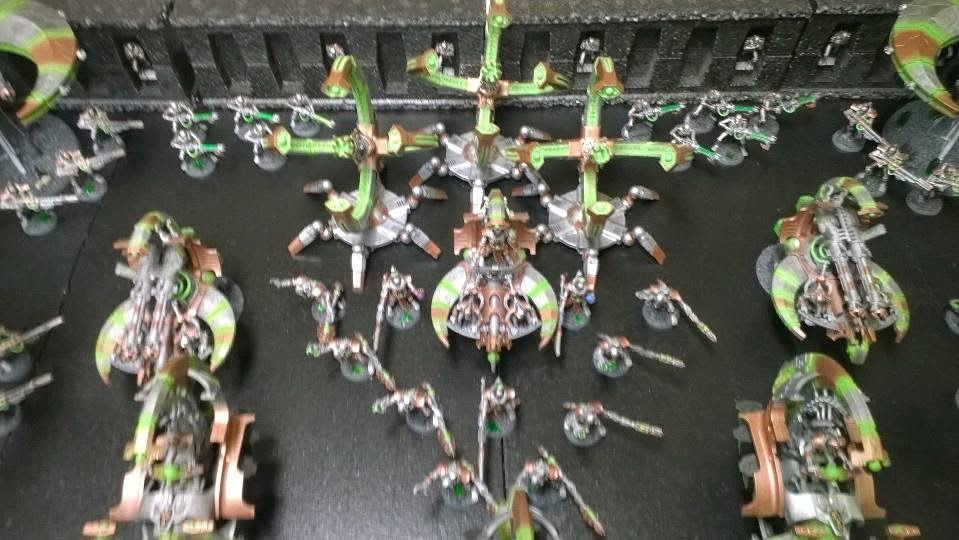 My first game was against Necrons and was against a familiar opponent. Usually I find myself on the bad end of an ass whooping against this competitor. This time however, my dice were hot and I managed to pull out a 13-5 victory winning the primary (4x Objectives), tying the secondary (Kill the opposing Warlord), and getting 1 tertiary (First Blood). Highlights include my first shot from a Riptide taking out both of his Command Barges. Fire Warriors rolling 6 out of 6, 6's to hit a Nighscythe and take it out of the sky. Warp Spiders also did some work weakening one of his Overlords and dropping a Nightscythe at a critical point in the game as well as refusing to die to mass fire. 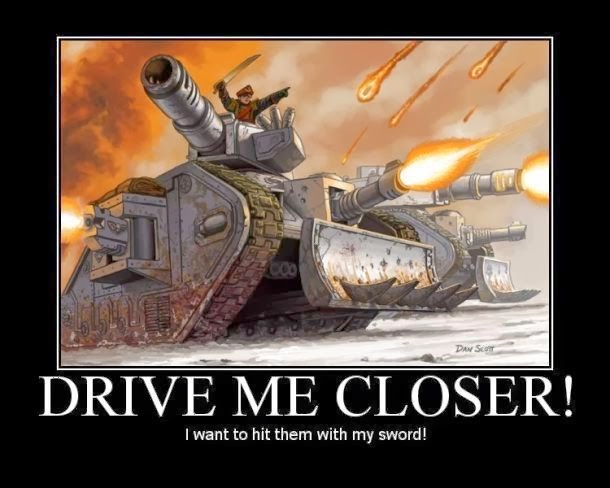 My second pairing was against Imperial Guard/Inquisition. Primary was Emperors Will (2 Objectives), Secondary was Table Quarters with a Dawn of War deployment. This was a very close game. He had a blob squad of 40 guys with a 4+ invulnerable and stubborn, which he marched directly for my objective. Had he chose to camp the blob on his objective I have no doubt that he would have won. Sadly for him, he chose not to. I focused all of my fire on his objective and cleared it by the last turn. I turbo boosted my jet bikes onto my own objective to contest his blob which had finally made it there, and sent my 2nd jet bike squad to take his objective for the win. Final score was 12-5. Highlights were jet bike shenanigans and the Wraithknight taking out an Executioner, Vanquisher, and 2 units of guardsman. 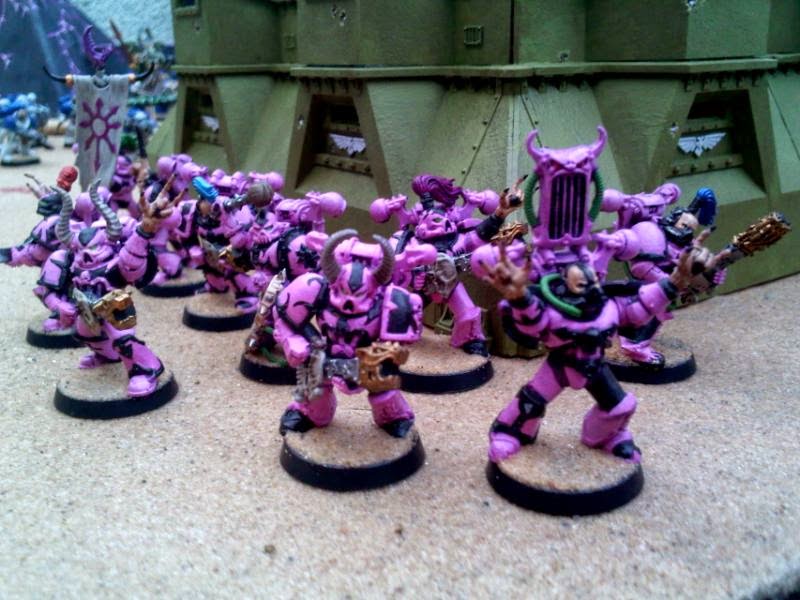 The final game was against Slaanesh CSMs/Imperial Guard. Primary was Victory Points (Had to be 185 points above your opponent to win), secondary 3x Objectives with a Vanguard deployment. This was another nail biter game that came down to the last turn. Just like the previous game, turbo boosting shenanigans from the jet bikes netted me the victory. I was above on Victory Points but not high enough, so we tied Primary. I still took secondary though as well as Last Laugh (Whoever kills the last unit). The game ended 11-6.

I was super pleased with my performance for the day. Though I won all my games, my overall point total wasn't enough for first place. I did take second though and walked away with a bunch of great prizes! I'm looking SO forward to getting the Aquila Strongpoint on the table and bolstering my other armies with the new additions. HOORAY! 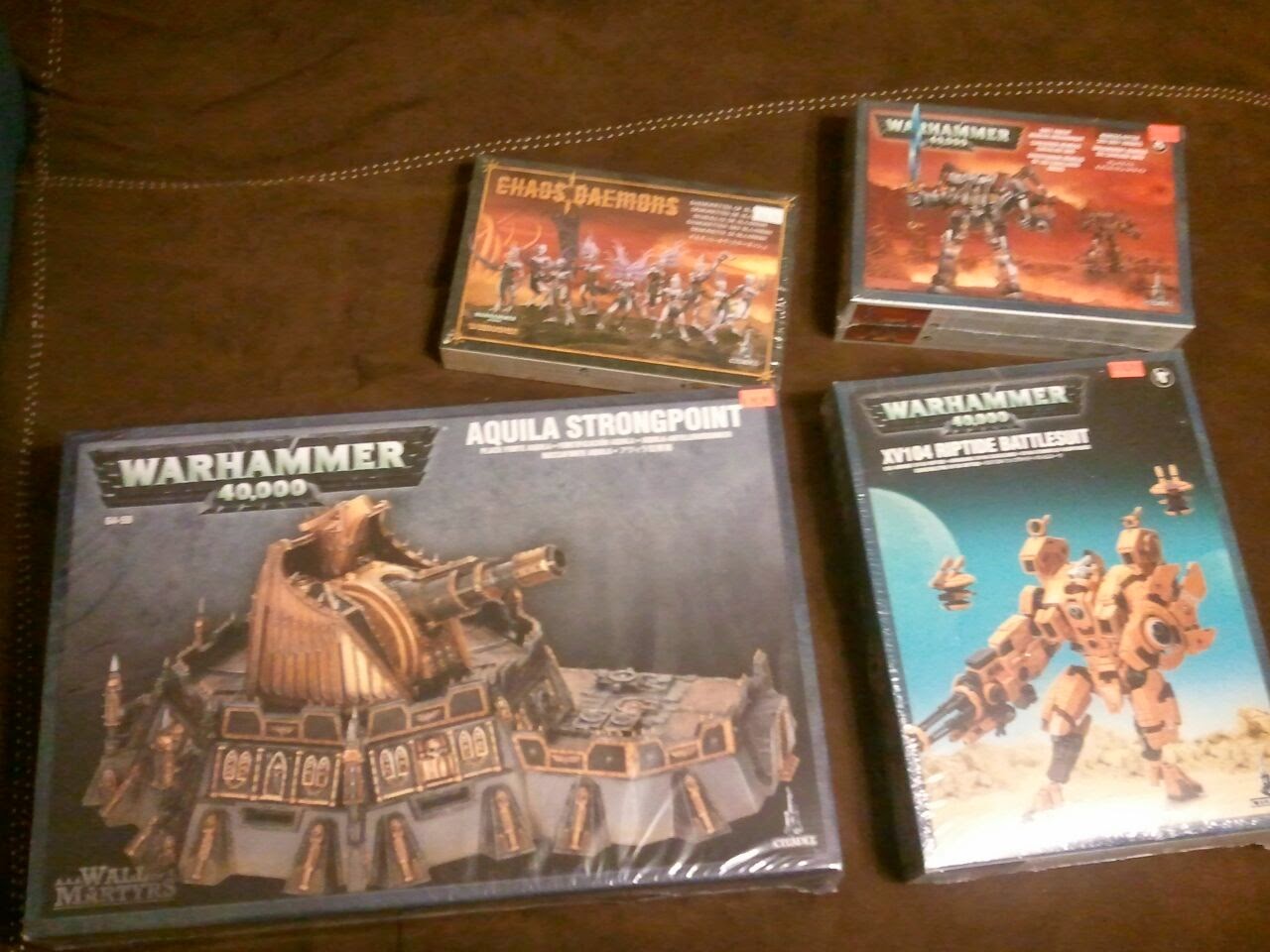 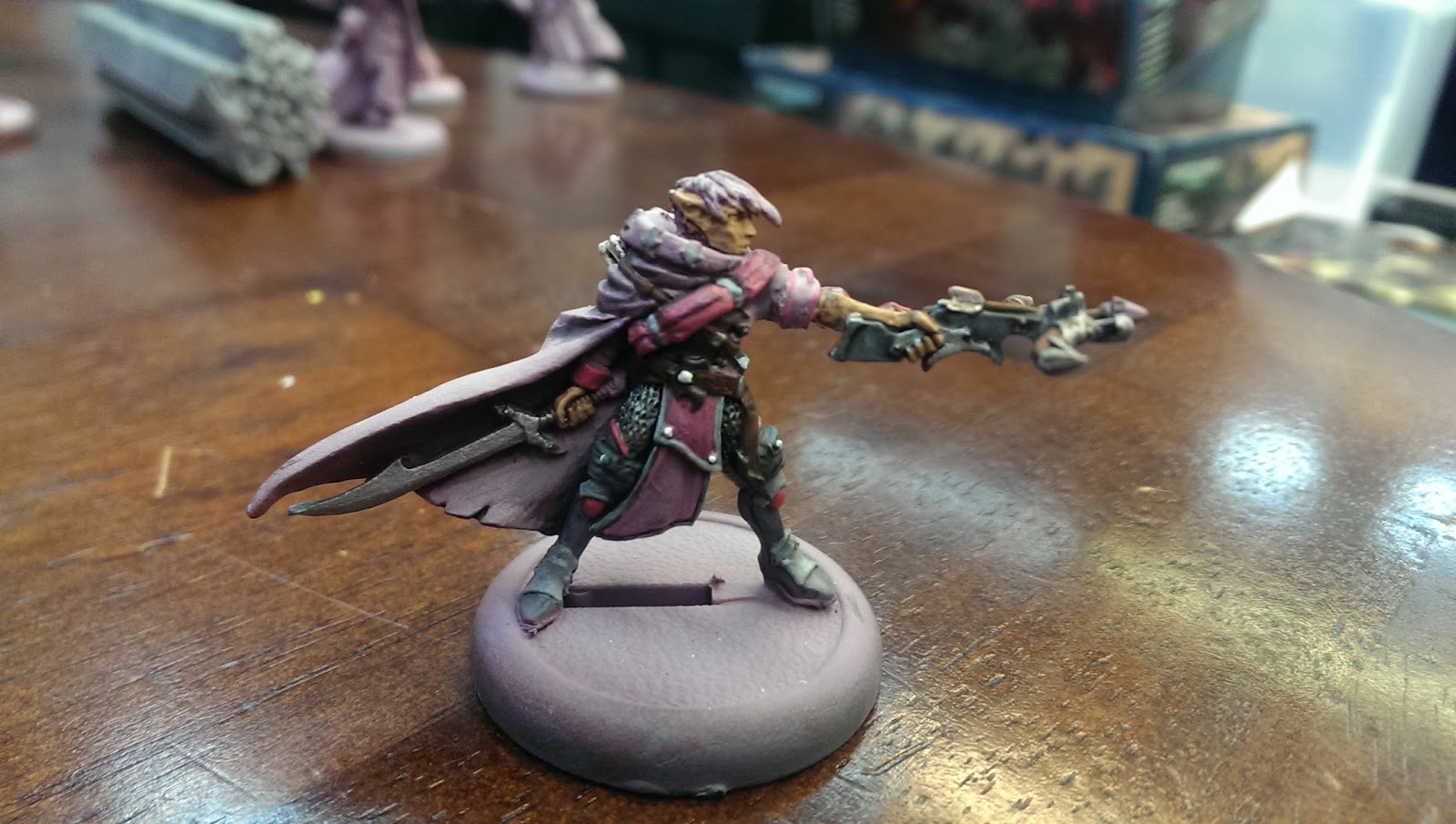 Our Warmachine obsession continues this week with a 25 point Cygnar vs Retribution game. The store was so full of 40k players we weren't able to get one of the nice tables. That wouldn't deter us though. We set up on the only other table available. We called it "The Disc of Death". 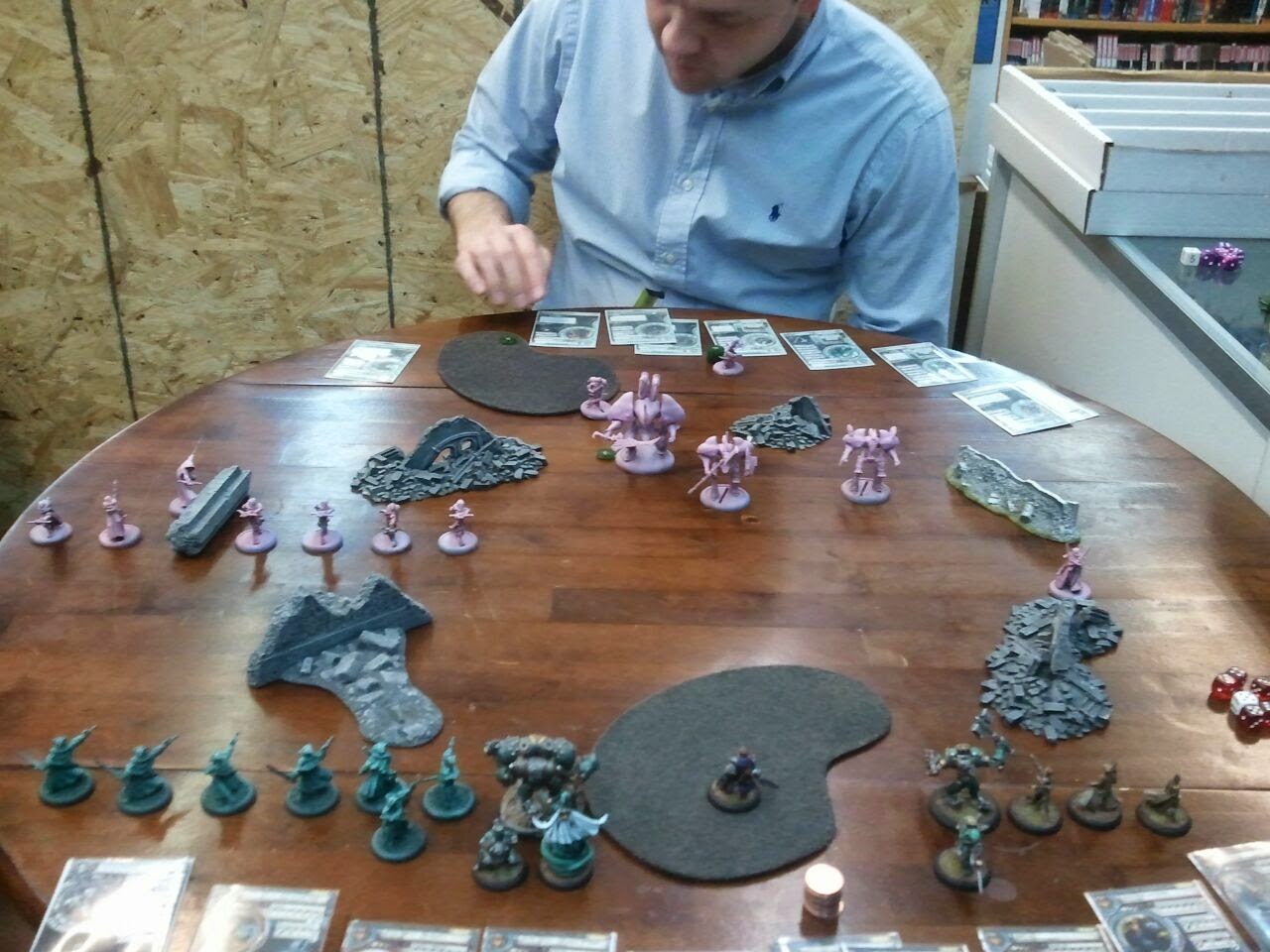 He won the roll to go first and this is how he ended after his turn 1. Sadly for him he forgot to shoot his Mage Hunter Strike Force at my Arcane Tempest Gun Mages. A mistake he would certainly regret. 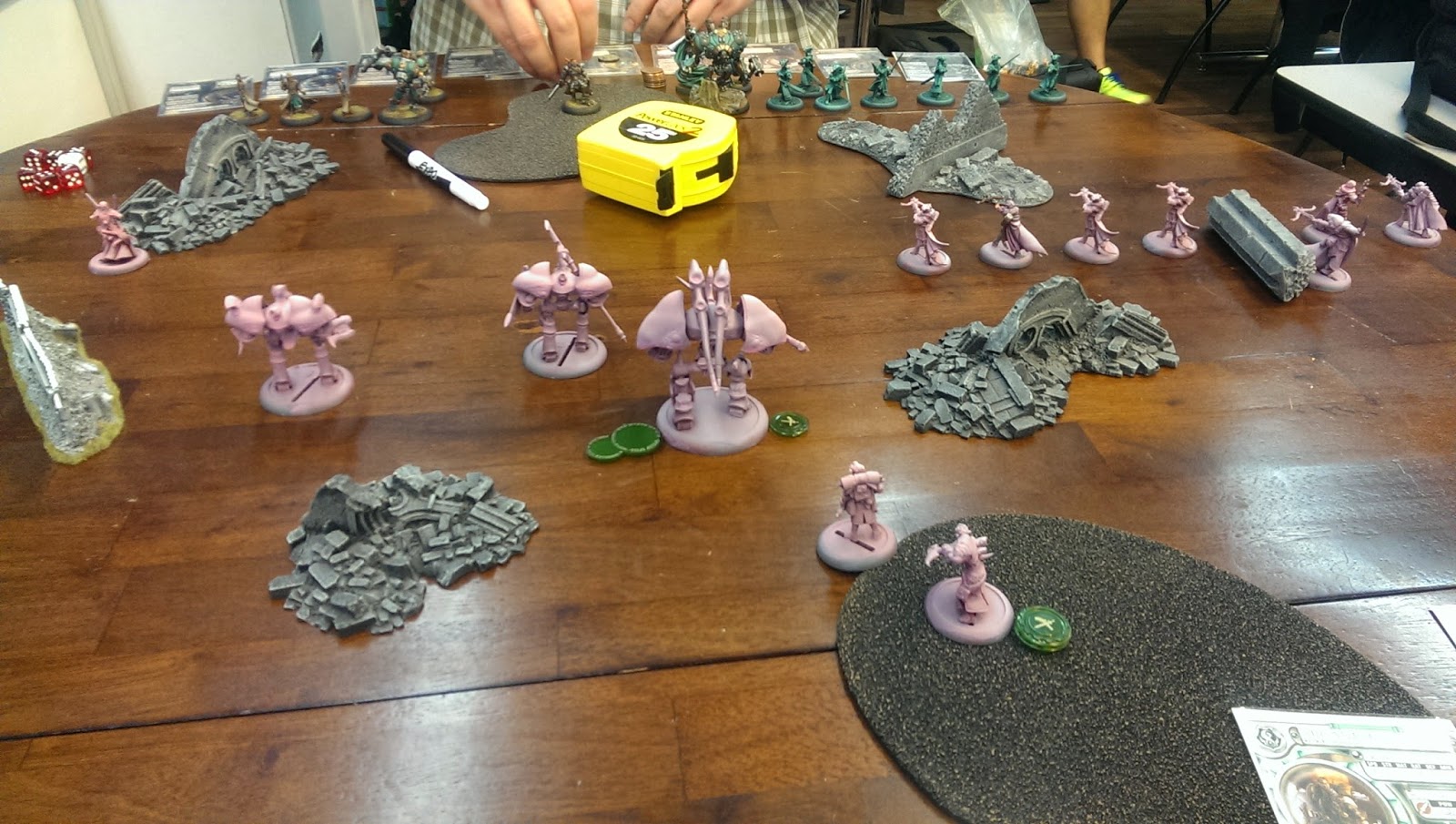 During my turn the Black 13th moved up and took out Narn with extreme prejudice before he could get to my Journeyman Warcaster. My Ironclad charged and killed a Mage Hunter and the Arcane Tempest Gun Mages moved up and killed the rest of the unit using Deadeye from Haley. The Professor shot at the Griffon and knocked it down while the Charger used it's special shots to nearly kill it. 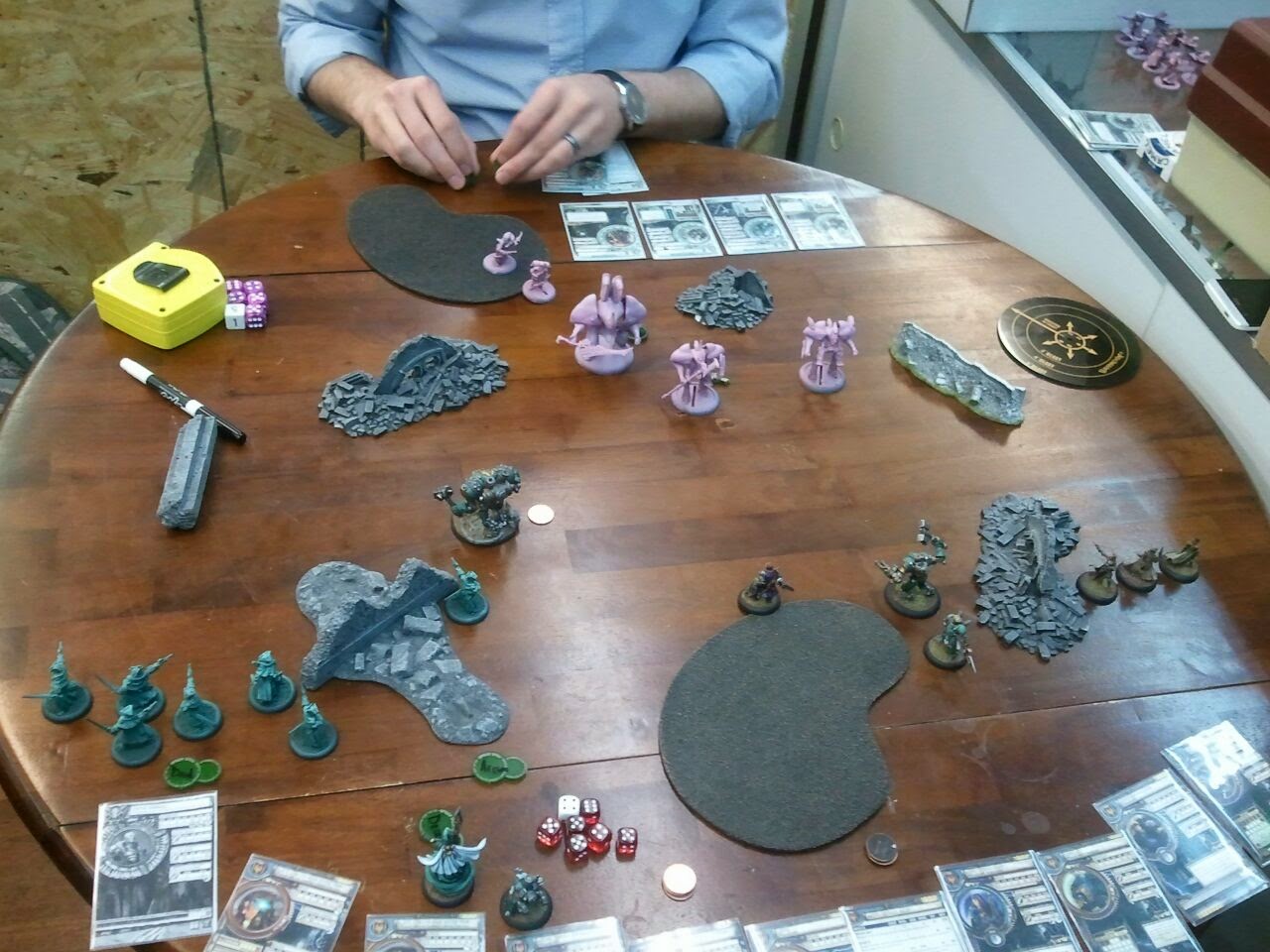 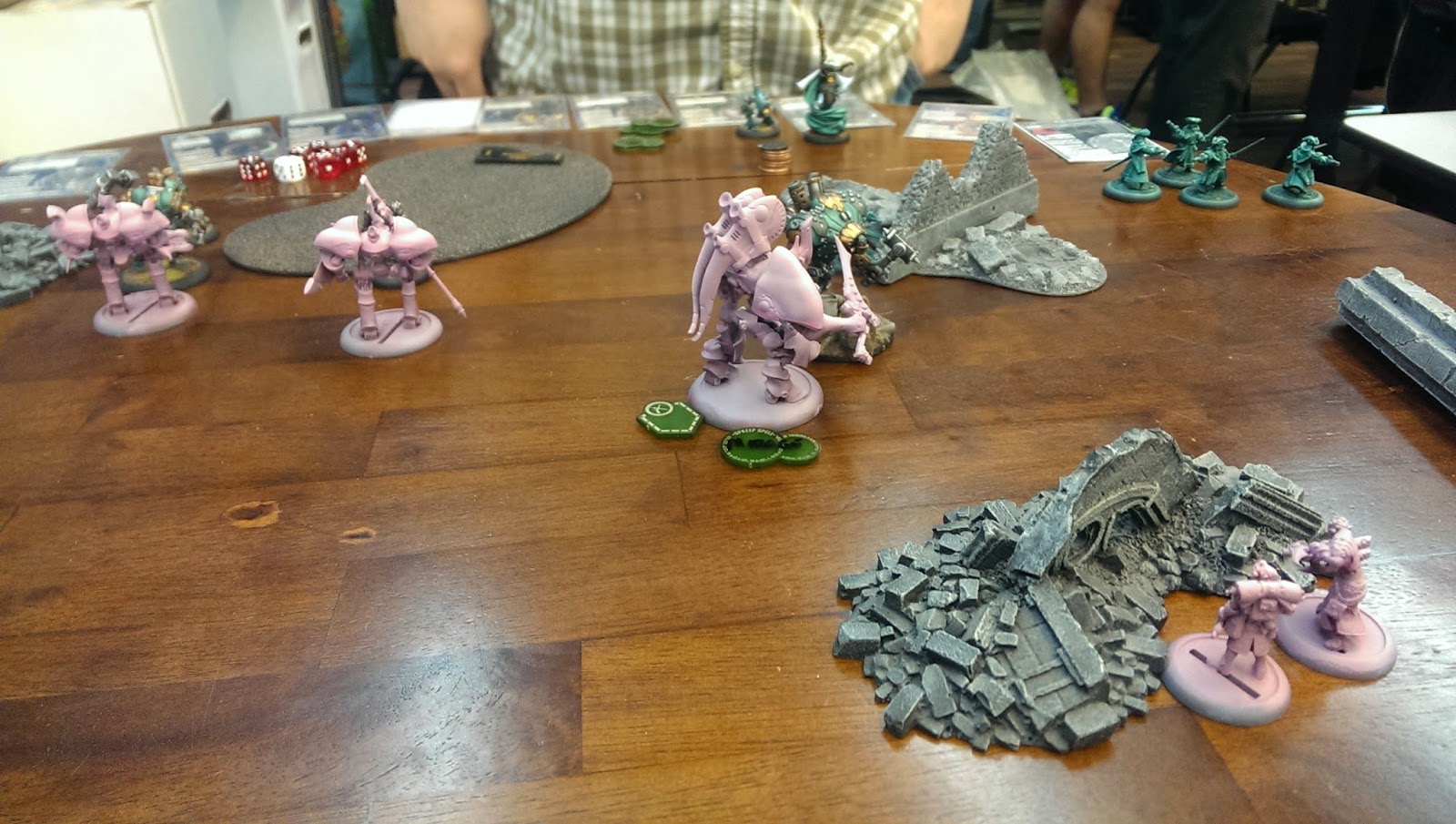 His Chimera Charged my Charger and destroyed his hammer arm making it very difficult for me to ever kill it. His Griffon stood up. His Phoenix charged my Ironclad and just pooped all over his cheerios, lighting him on fire and Nearly Killing him. His Arcanist and Garryth moved up. 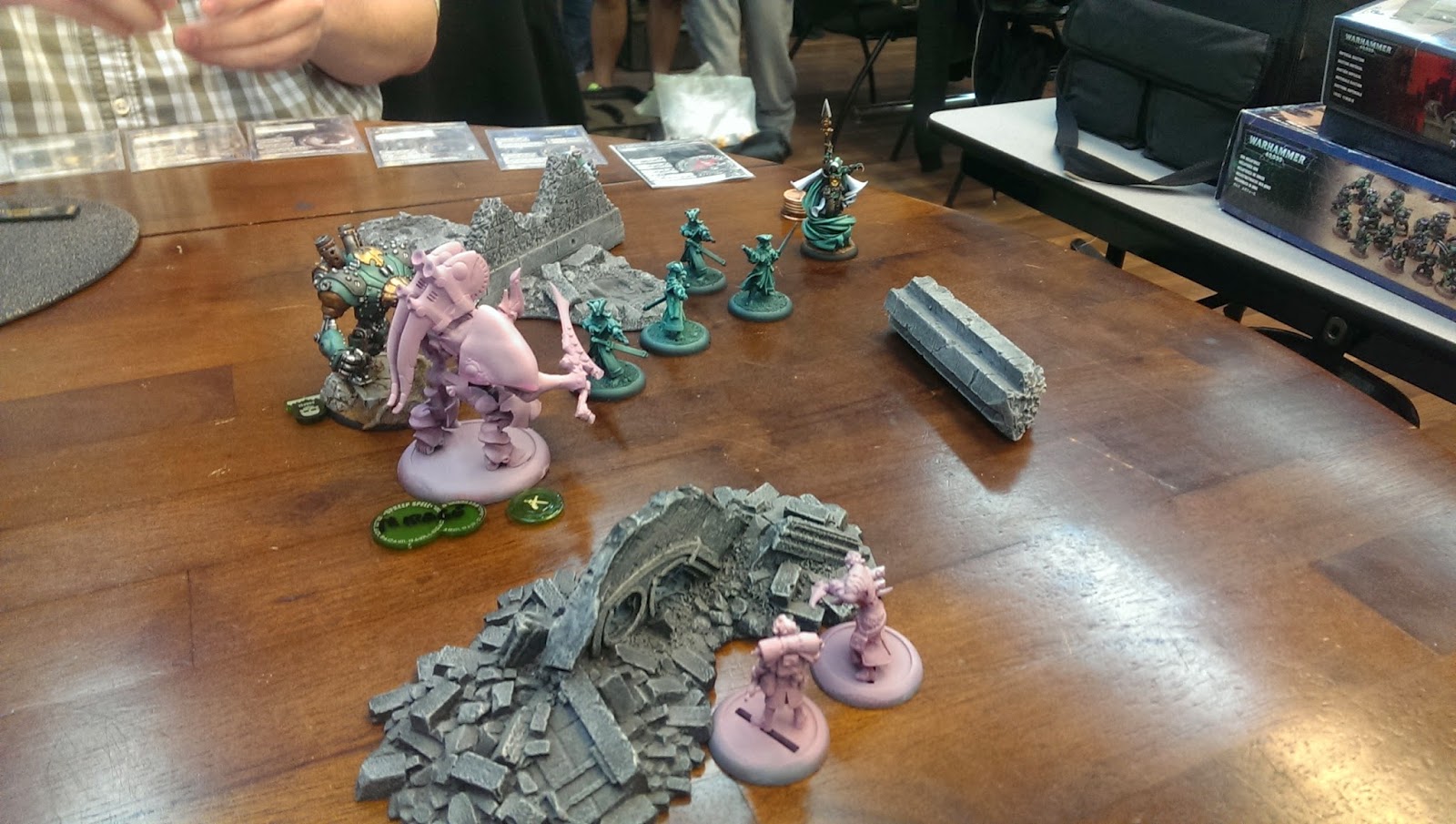 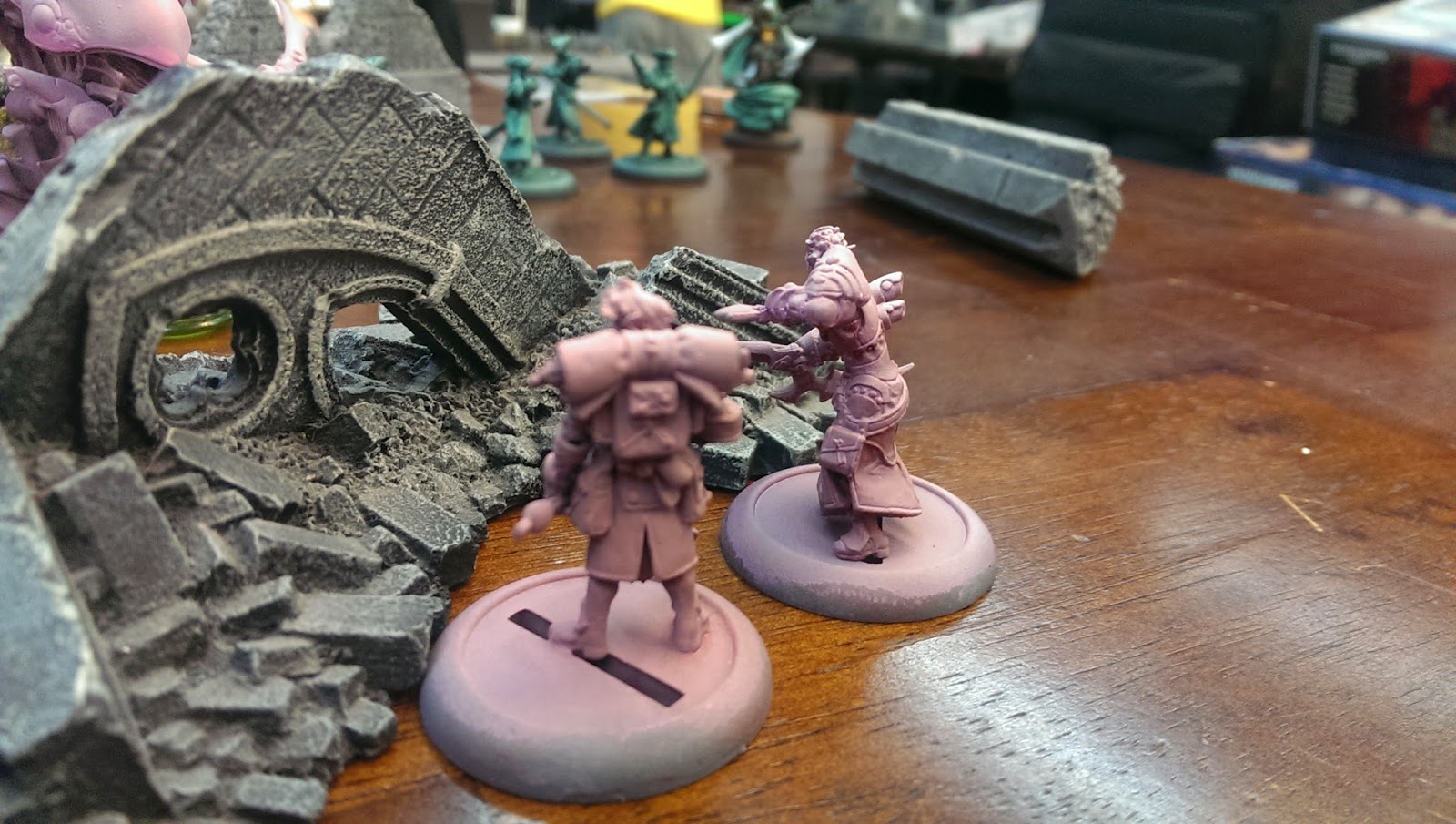 In my turn I foolishly charged the Chimera with my Journeyman Warcaster and did nothing. The Ironclad did some minor damage to the Phoenix. The Professor attempted to knock down the Griffon again and failed. The Arcane Tempest Gun Mages moved up to shoot at Garryth for the assassination victory, but I foolishly forgot to fire them. I also moved the Black 13th up to shoot Garryth but forgot to fire them as well. I'm still too caught up in the rules from 40k to remember to take all of my actions during my activation phase instead of moving everything, shooting, then assaulting. Sadly I missed my opportunity to win the game because of my poor memory. 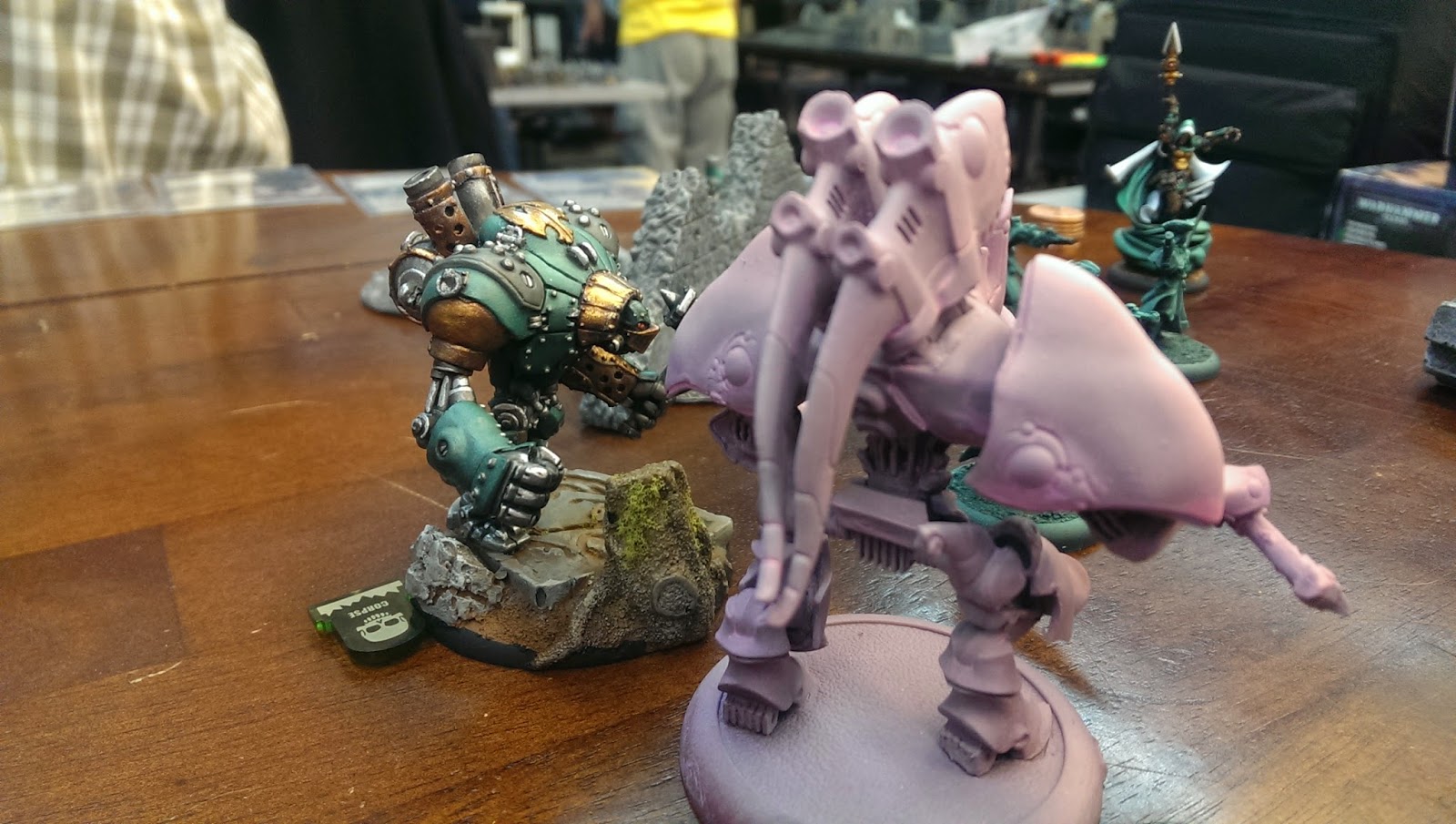 I would pay for my mistakes this turn as the Phoenix would use Combustion to kill the Ironclad and a few Gun Mages. The Chimera smashed the Journeyman Warcaster in to goo rendering the Charger inert. The Griffon moved up to confront the Professor. Garryth and The archaist moved back toward the ruins 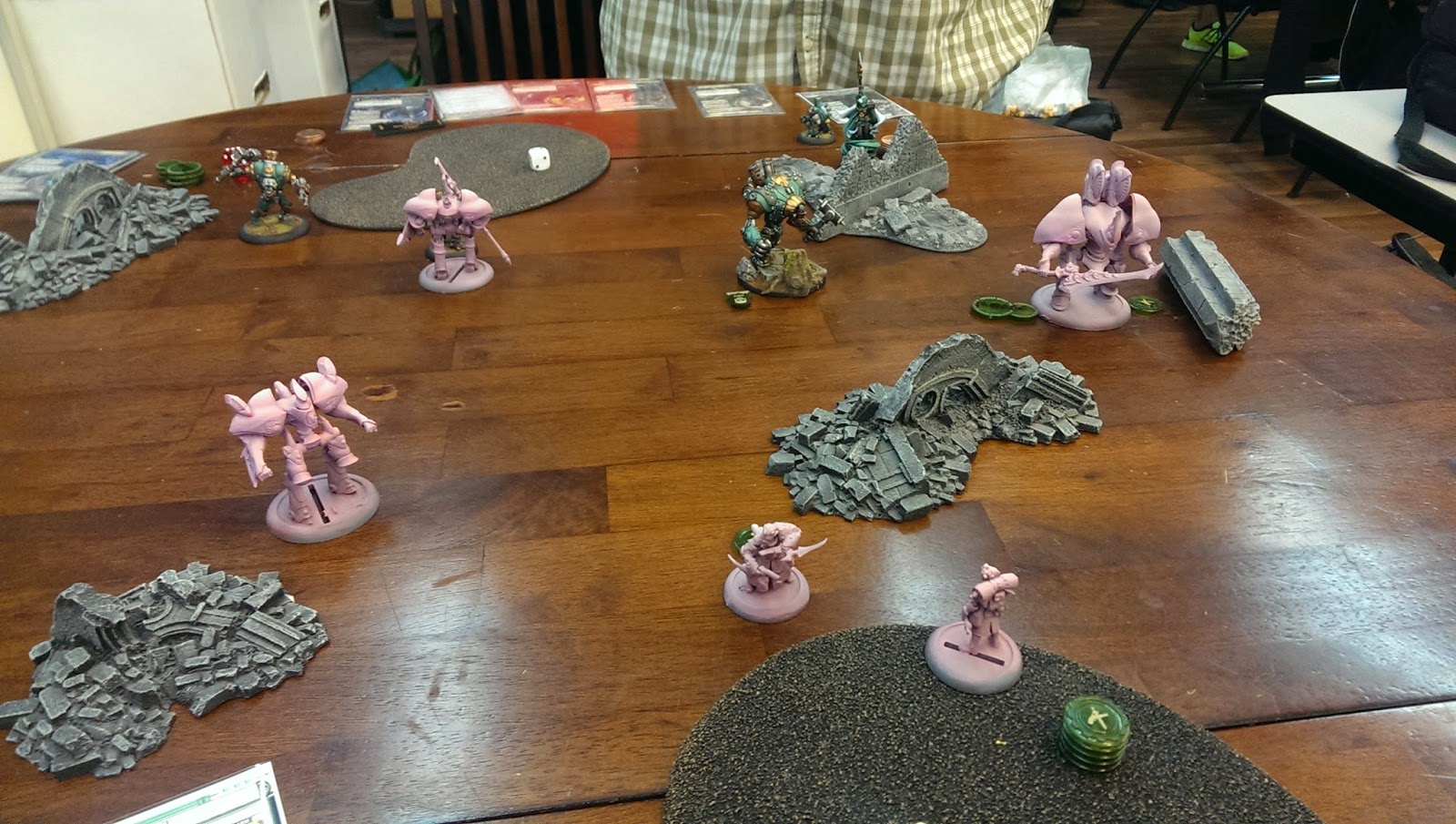 The only thing I could do was retreat with Haley towards my board edge. The Black 13th moved to take shots on Garryth doing some damage but failing to kill him. The remaning Arcane Tempest Gun Mages took shots but failed.

His Phoenix would kill the the remaining Gun Mages and a combination of shots from Garryth himself and the Chimera charging would take out the Black 13th.

At this point I only had Haley and her Squire left so I tried to make a suicide assassination run on his caster only to fail killing him by, I think, 3 HP's. After that he charged Haley with Garryth and easily chopped her into bits. 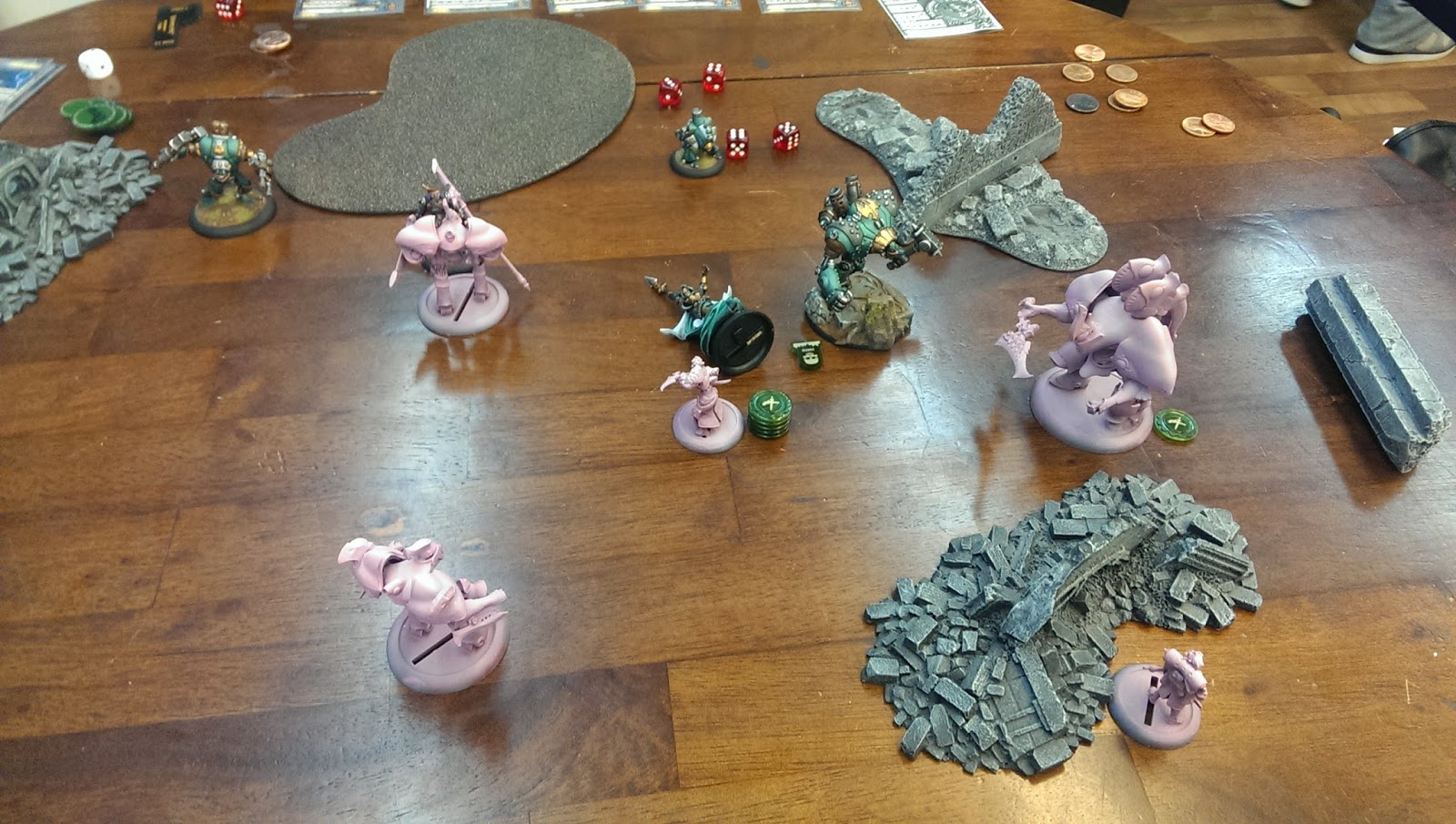 The number one lesson we learned about this game was to ALWAYS remember to shoot your guys. It would have been a very different game had he remembered to shoot at me with his Mage Hunters turn 1 or if I had remembered to fire my Gun Mages and Black 13th on turn 2.  All in all, a great and fun game. Can't wait to play my next.

Posted by Makers No comments:

Last week at the LGS I ran into a few friends of mine playing some Daemons vs Chaos Space Marines.

Some people from r/Warhammer may know him as Squoze, the Herald of Nurgle

He also have a blog over at The Lonely Havocs.

He was running full Nurgle as always and I had to get a few pics to share as I really appreciate his skill and creativity when it comes to customization. 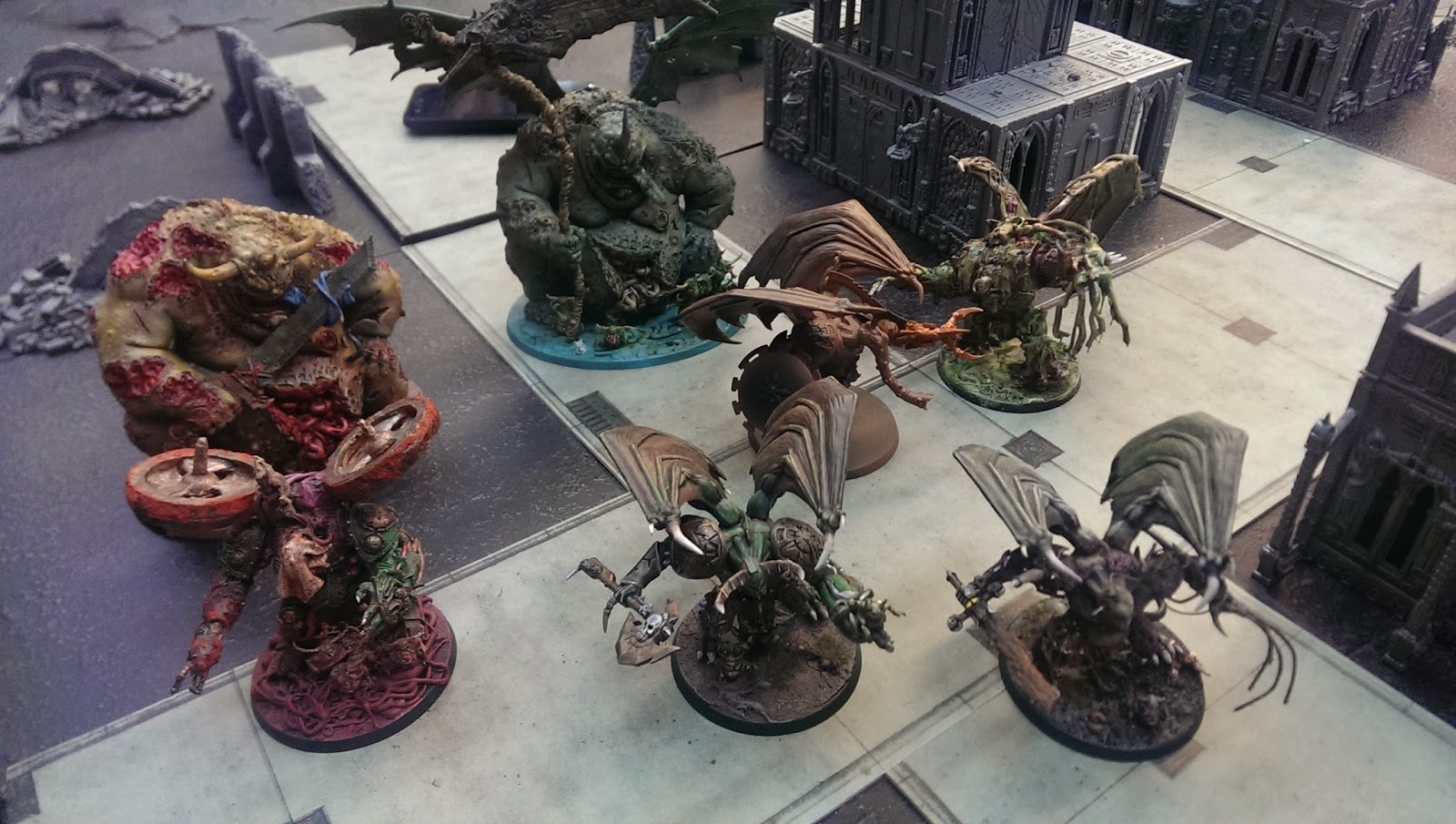 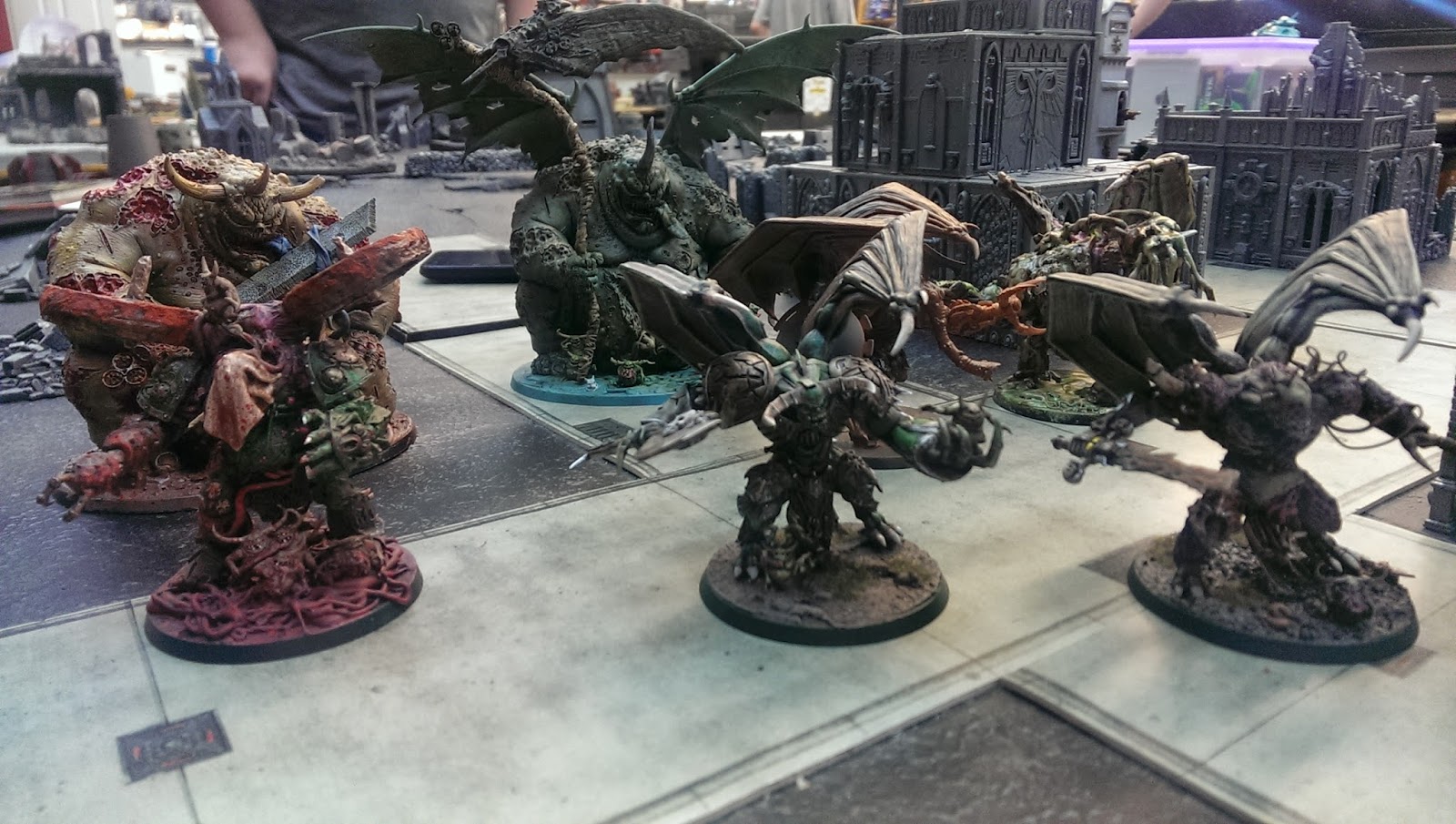 And my all time favorite of his...

Lord Bjorn and Baby Carlos, the one man Wolfpack of Nurgle. 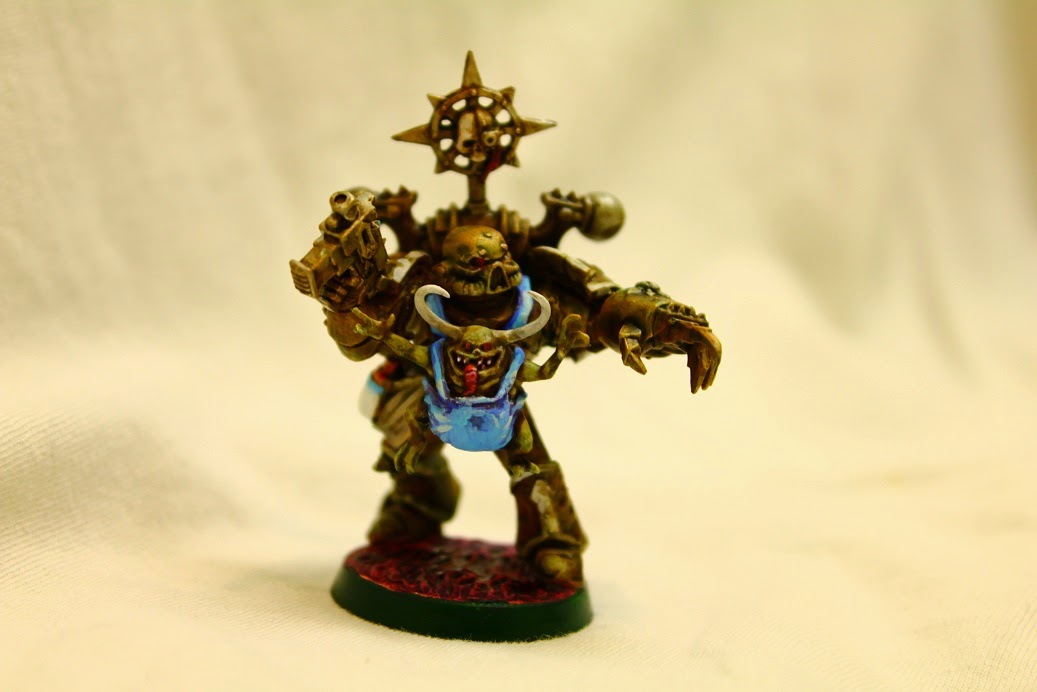