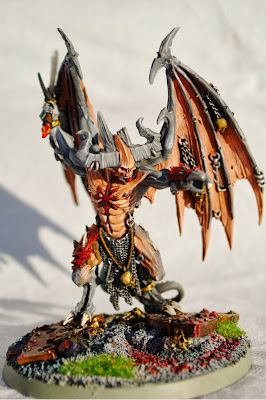 Well this is something new, and what looks to be the future of GW.
Micro transactions and digital releases. I weep for those that still don't have smart phones or tablets.

Everyone pretty much knows the rules for him by now, if not they are as follows:

- Almost same price as a 20 pack of Flesh Hounds
- Same stat line as a base Daemon Prince, except that he is Leadership 10, which means he's the Warlord.
- Only has a 4++, no armor save whatsoever.

- Eternal Warrior and Shrouded
- Mastery Level 3 psyker, has access to all Telepathy powers
- Weapon has Fleshbane, Armourbane, is Master-Crafted, and give him +1 Strength
- If any enemy unit fails a morale check, he gets an extra D3 warp charges for that turn only
- Warlord trait applies a -1 modifier to your opponents Fear checks
- He has no mark of any of the 4 Greater Daemons.

I think the model looks pretty rad and have always considered purchasing one to use as a Daemon Prince in 40k, I could just never find the damn thing. Other than that, I am officially not on the band wagon. Yes new shiny things are always cool at first glance, but I like to dig deeper into the murk to find out what its about.

I will be speaking from a Daemon Players perspective here.
I don't play enough CSM to provide an accurate opinion of him, so I'm not going to just make some random predictions to get more page hits.

First off, I love his Telepathy mastery. With access to everything he becomes one of the best support characters in the game. Able to buff or debuff as needed every turn., he provides high adaptability in all scenarios which is extremely nice when you don't know ahead of time who or what you will be in competition against.

Eternal Warrior and Shrouded are also nice here in terms of keeping him alive...but how reliable is it?

In my opinion, its not enough to justify his cost.

At the end of the day, he is still a Toughness 5 creature with 4 wounds and only a 4++ to save his ass.

Let's say I'm facing him with Tau.
If my Firewarriors get Line of Sight on him, they'll be forcing grounding test on him, or Pathfinders can  with Markerlights. After that he has a 50/50 chance to save whatever else I shoot him with. Hell, you could almost take him down with a small unit of Pathfinders and Firewarriors.

Oh! And the fact that Tau have this weapon available to half of their army called a Smart Missile System. It's just a S5 weapon that ignores cover...and doesn't require Line of Sight.

Another major issue is that he becomes your Warlord over Fateweaver. This is completely unacceptable as any competitive Daemon player will tell you that Fateweaver's Warlord trait is game changing in and of itself.

Also he has no "mark" which means he doesn't unlock Daemon Princes, and since you are still running Fateweaver for obvious reasons, your locked into Tzeentch Princes.
Which aren't bad, they just aren't my first choice.

I think if you run the Tzeentch Princes, then you are also basically locked into rolling Biomancy on them, and hoping for Endurance just so you can cast it on Be'Lakor.

Daemons are based on this strategy and the key to a good list is limiting the number of these steps, while trying to maintain, if one of the steps does fail.

This is why Fateweaver is so important, to limit the bad things that happen to your army.

Personally, I will stick with my Mastery Level 3, 2 x Greater Reward, Keeper of Secrets.
He costs, 90 points less....90!!...Unlocks Lash Princes in the Heavy slot, Still provides me 3 Telepathy power per turn, has a MUCH better stat line, Fleet + 3", and Hatred Eldar.

So basically you get that, and a free unit of Horrors for the same price as Be'Lakor...ridiculous.

This game is all about value. Getting the most out of your points.

I think Be'Lakor removes too many options from my army, and costs too much for what he is.

Maybe I'm just biased after seeing what a Grimore'd Keeper with Dark Blessing can do.
Well, that and Iron Arm'd Lash Princes are amazing.